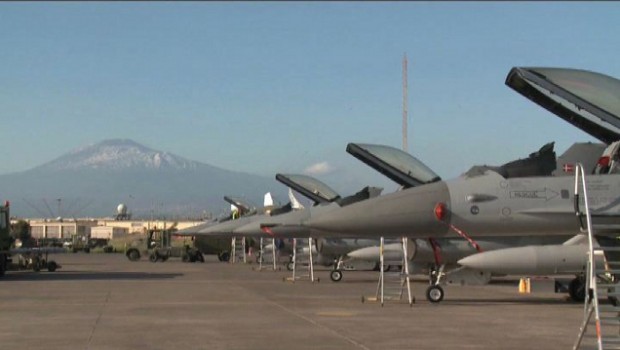 U.S. Army ready to a new attack in Libya from Sigonella (Sicily)

500 marines just moved from Spain to Sigonella along with assault vehicles (including Bell Boeing CV-22 “Osprey” that are hybrids aircraft\helicopter known for the big number of accidents, even fatal). From Washington the government speaks of “growing instability and violence” in Libya and “deterioration of security situation”. The american citizens are invited to leave Libya and also part of the diplomats in Libya are going back in the States.
So the U.S. justify a new military attack, the only instrument in the hands of the “democratic” Obama to lift the country out of economic crisis by filling the pockets of the gun lobbies.

In this context Sigonella is, once again, the nerve center of war operations, making us all complicit in this U.S. imperialist mania. Italy is subjected to great danger being exposed to possible reactions of the countries attacked by the U.S.. If Sigonella is not enough, we want to remember that we host 113 NATO bases in Italy and that the U.S. is building in Sicily the great communication system called MUOS which will facilitate the use of weapons, making them even more effective.

We are not complicit in the USA! Yankee go home!